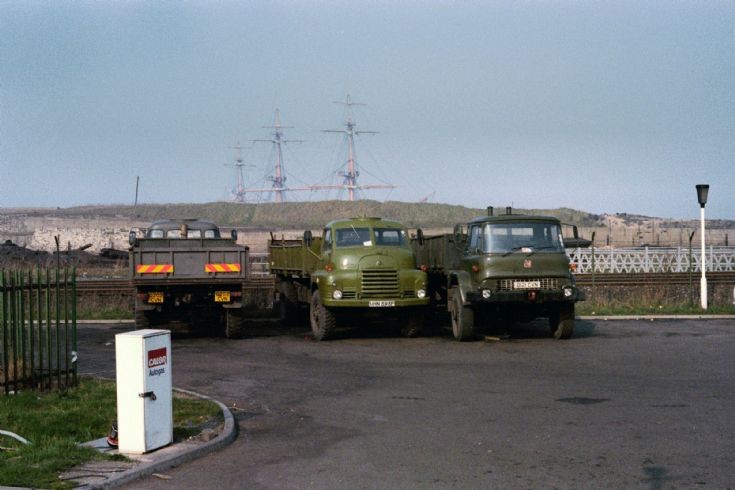 A trio of Sea Coal wagons at Hartlepool in 1984. Two are Bedford RLs and the other is a TK.
These ex Military vehicles could quite often be found along the North East coast travelling along the beaches collecting up coal washed up on the beaches from ships cleaning out their holds.
In the eighties most were big Bedfords like these or Austins, but now you are hard pushed to see a Landrover doing it these days.
The three Master in the background is HMS Warrior then undergoing its restoration at what is now Hartlepool Historic Quay.
Picture added on 12 February 2013 at 21:07
add commentComments:
The truck on the right is a MK - the four wheel drive derivative of the TK. Both used the basic TK cab shell but the MK used wide wings similar to the KM and usually had a circular roof hatch which has various names/designations. The MK also featured a split ( two piece) front bumer. Although most M-tyoes had Bedford 330 engines, UK military versions had lower-powered multi-fuel engines etc.etc I could go on but !!

Added by Peter Goodall on 18 February 2013.
The coal was not the cleanings of ships, but what came from the local pits and underwater coal vanes. I personally worked in the industry from the age of 12. You tended to start off filling bags and hauling it off the beach on a pedal bike. As you got older you progressed to working an a landrover then up to a K9 or RL as you got older and stronger.

Added by Chris on 20 January 2014.
Many thanks for your comments Chris, I'm trying to do a bit of research on Sea Coal wagons. I remember seeing them at Seaton Carew (Hartlepool) and Murton further up the coast. These Bedfords were photographed back in 1984. The ones I remember the most were the Austin K9s and there used to be a yard near Greatham which contained several of these in a chassis/cab combination. Given their importance to the North East's social History I'm surprised that none survive in preservation, although I would imagine the salt water wrecks them fairly quickly.