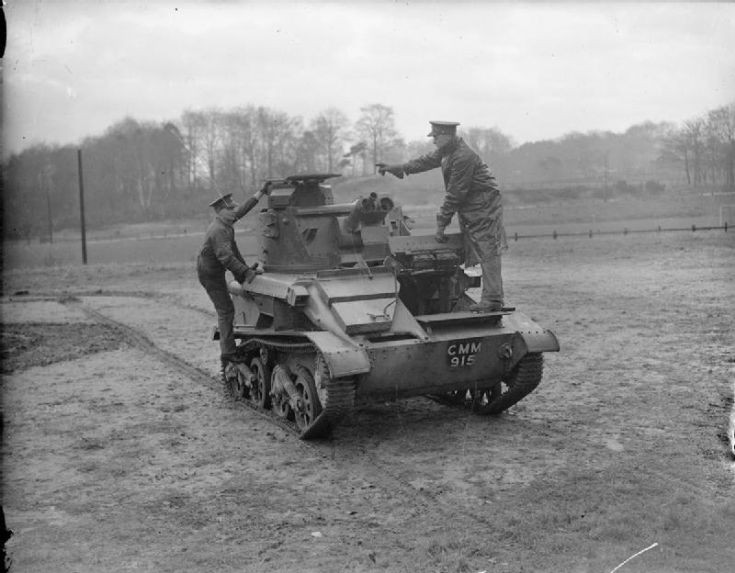 The crew of a Light Tank Mk VI climb into their vehicle, Aldershot, 1939.

The Tank, Light, Mk VI was the sixth in the line of light tanks built by Vickers-Armstrongs for the British Army during the interwar period. The company had achieved a degree of standardization with their previous five models, and the Mark VI was identical in all but a few respects. The turret, which had been expanded in the Mk V to allow a three-man crew to operate the tank, was further expanded to give room in its rear for a wireless set. The weight of the tank was increased to 10,800 pounds (4,900 kg), which although heavier than previous models actually improved its handling characteristics, and an 88 horsepower (66 kW) engine was added to the model to increase its maximum speed to 35 miles per hour (56 km/h). It had the Horstmann coil-spring suspension system which was found to be durable and reliable, although the fact that the tank was short in relation to its width and that it pitched violently on rough ground made accurate gunnery whilst moving exceptionally difficult. The Mk VI possessed a crew of three consisting of a driver, gunner and commander who also doubled as the radio operator, between 4 millimetres (0.16 in) and 14 millimetres (0.55 in) of armour, which could resist rifle and machine gun bullets, and its armament consisted of one water-cooled .303 inch and one .50 inch Vickers machine gun.