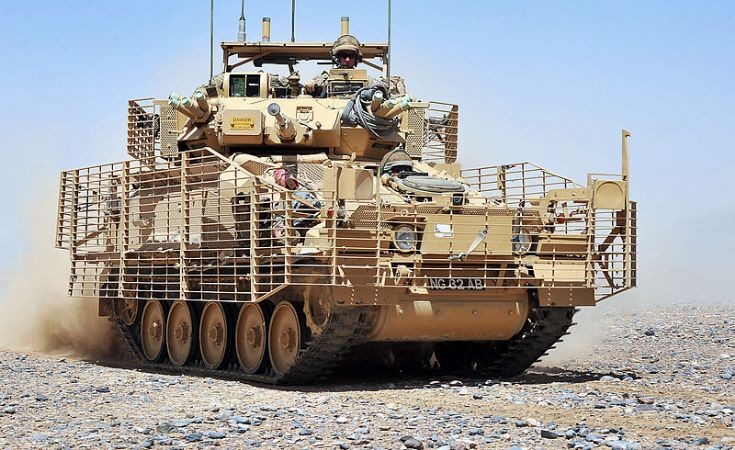 A CVR(T) (Combat Vehicle Reconnaissance (Tracked)) vehicle is pictured being operated across the harsh desert terrain of Afghanistan by soldiers of the 9th/12th Royal Lancers.

The first of the enhanced Combat Vehicle Reconnaissance (Tracked) (CVR(T)) fleet are now operational and being put to good use by the Lancers, whose main task is to overwatch the battle space either side of Highways 1 and 611, the two main supply routes that run through the Task Force Helmand area of operations.

BAE Systems has upgraded the armour on all five vehicles that make up the CVR(T) family – Scimitar, Spartan, Samson, Sultan and Samaritan – through an Urgent Operational Requirement process worth around £30M. CVR(T) was on display in the UK for the first time at the DSEi exhibition in London.

As part of the contract, the vehicles have been re-hulled to give better mine-blast protection for troops, improved armour added for enhanced resistance to blasts and ballistics, as well as new mine-blast protection seating in every position in every variant. Other enhancements include repositioned foot controls and a revamped fuel system.

Scimitar Mk 2 builds on a number of upgrades that have previously been made to the CVR(T), which address the problems experienced while operating in the harsh Afghan environment. These previous upgrades have included improved power output, new gearboxes and transmissions, air conditioning, improved communications, air filters and night vision systems.

Picture added on 23 August 2013 at 07:49
add commentComments:
The main change was a brand new hull made from armour plate that gives better protection against IED's.
The new hull was based on a Spartan but is wider to allow the installation of a Scimiter hull. This set is likely to make the vehicle somewhat top heavy.