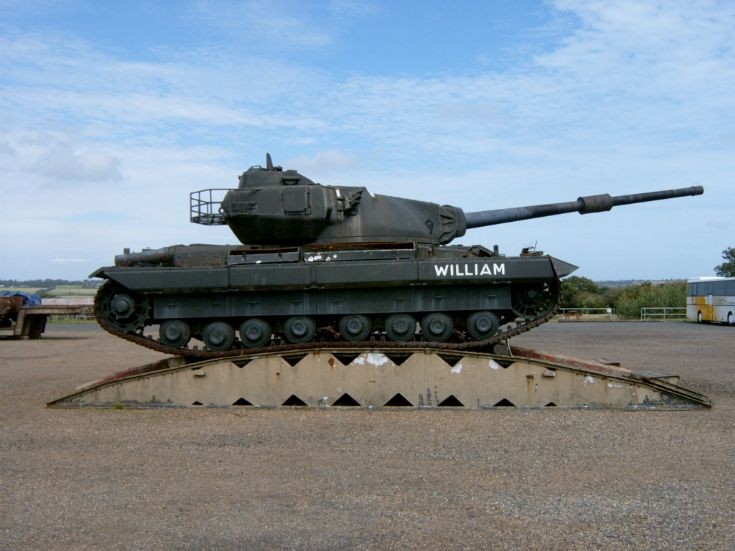 Editor note: Does anyone knows what kind of tank this is?
Picture added on 17 September 2010 at 18:39
This picture is in the following groups
Military Museum, Isle of Wight, United Kingdom
add commentComments:
Heavy Gun Tank FV401 Conqueror

Added by AlfvanBeem on 17 September 2010.
FV 214 Conqueror
"There used to be a Conqueror at Base Vehicle Depot Ludgershall - a gate guard named William."
en.wikipedia.org/wiki/Conqueror_tank#Surviving_Vehicles

Added by Roger Greenaway on 18 September 2010.
This Conqueror is the one from Ludgershall, it's now inside awaiting restoration.

Added by Roger Mason on 29 January 2011.
I think there was a 2nd Tank at Ludgershall along with william, any ideas what it was/it's name, please ?.

Added by Dave on 25 April 2012.
It's certainly a Conqueror, and a severe test for a fairly old bridge!

Added by John Harris on 29 April 2012.
During the 1980's there were a number of gate guards at the Ludgershall Vehicle Depot as follows:
William - Conquerer
Horatious - Centurion
Saladin Armoured Car
Saracen APC
They were all given names but I cant remember the names of the Alvis AFV's.
I was a regular visitor to the depot for 6 years during the late 1980's.
Regards,
Steve
PS
Tank transporters were not allowed to use the bridge or travel through Ludgershall they could only get to the depot by using the road from Tidworth.