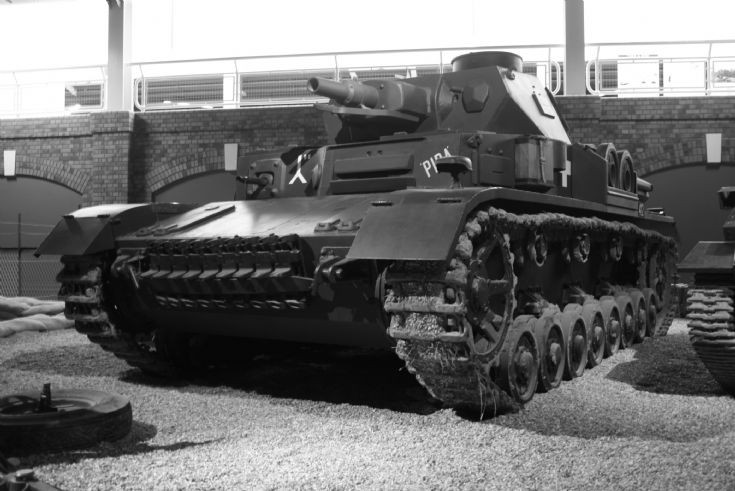 The Panzerkampfwagen IV (Pz.Kpfw. IV), commonly known as the Panzer IV, was a medium tank developed in Nazi Germany in the late 1930s and used extensively during the Second World War. Its ordnance inventory designation was Sd.Kfz. 161.

Designed as an infantry-support tank, the Panzer IV was not originally intended to engage enemy armor—that function was performed by the lighter Panzer III. However, with the flaws of pre-war doctrine becoming apparent and in the face of Soviet T-34 tanks, the Panzer IV soon assumed the tank-fighting role of its increasingly obsolescent cousin. The most widely manufactured and deployed German tank of the Second World War, the Panzer IV was used as the base for many other fighting vehicles, including tank destroyers and self-propelled anti-aircraft guns. Robust and reliable, it saw service in all combat theaters involving Germany, and has the distinction of being the only German tank to remain in continuous production throughout the war, with over 8,800 produced between 1936 and 1945. Upgrades and design modifications, often made in response to the appearance of new Allied tanks, extended its service life. Generally these involved increasing the Panzer IV's armor protection or upgrading its weapons, although during the last months of the war with Germany's pressing need for rapid replacement of losses, design changes also included retrograde measures to simplify and speed manufacture.

The Panzer IV was the most widely exported tank in German service, with around 300 sold to partners such as Finland, Romania, Spain and Bulgaria. After the war, the French and Spanish sold dozens of Panzer IVs to Syria, where they saw combat in the 1967 Six-Day War.