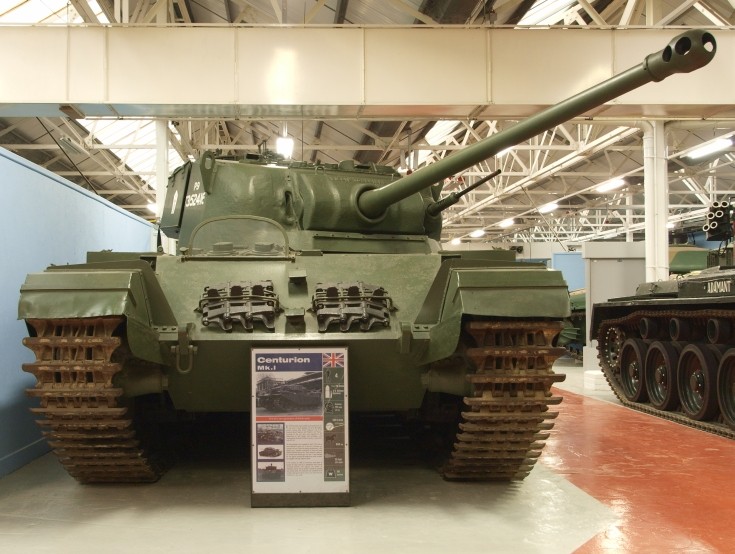 The Centurion was the primary British Main Battle Tank of the immediate post-war era, and considered by many to be one of the best British tank designs of all time. Designed during the Second World War it served in Europe, but arrived just too late for combat. It went on to provide excellent service during the Korean War where it outperformed both US and Soviet designs by a wide margin. It would go on to be one of the most widely used tank designs, equipping armies around the world, with small numbers still in service until the 1990s.The Centurion was used as the basis for a range of specialist equipment, including engineering variants with a 165 mm demolition gun. It is one of the longest serving designs of all time from the Korean War to the First Gulf war.

Centurion Mk 5 AVRE 165
Picture added on 23 June 2011 at 07:50
This picture is in the following groups
The Tank Museum, Bovington, England, United Kingdom
add commentComments:
Great write-up on the Centurion.
Exported to many countries the Centurion was the most successful UK built MBT being bought by numerous countries across the world.
It was pity that the UK did not come up with a new power pack as many countries, particularly, Israel, fitted new engines and gearboxes, primarily designed and built in the USA. A missed opportunity for UK Plc in the late 1960's and early 1970's.

Added by Stephen Prosser on 09 September 2013.
There were also two interesting artillery protoypes. One with a 25 pdr gun and another with a 5.5" medium gun, with the guns firing backwards over the engine deck.

Added by Roger Greenaway on 13 September 2013.
Because there was a shortage of AVRE 165's a number of gun tanks were converted by the addition of a special tow hook (for towing the Giant Viper trailer) and fittings on the glacis and front plates to mount a dozer or mine-plough.
This variant was known as the 105mm AVRE.